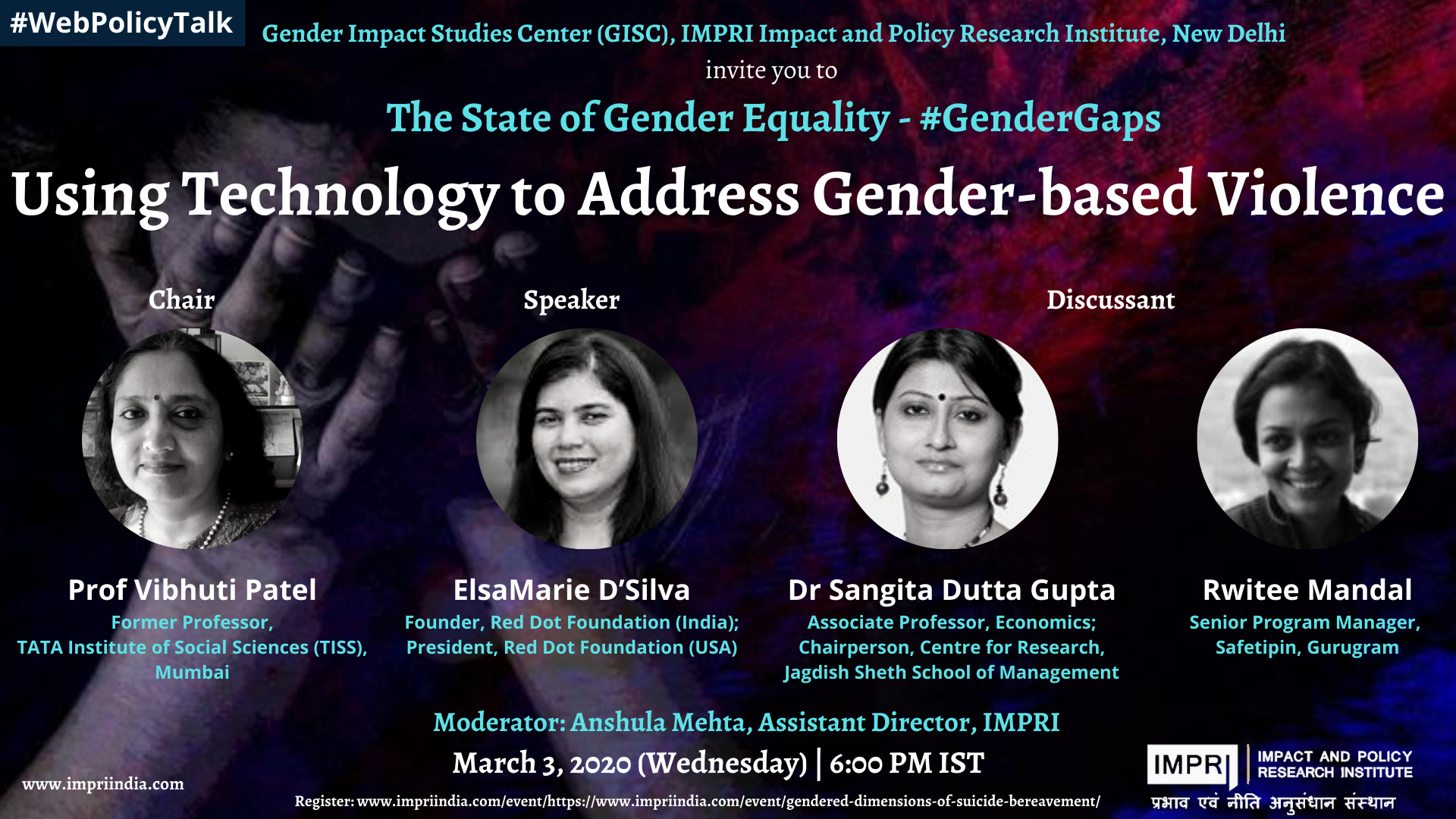 The State of Gender Equality – #GenderGaps with ElsaMarie D’Silva on Using Technology to Address Gender-based Violence.

The State of Gender Equality – #GenderGaps

ElsaMarie D’Silva is the Founder of Red Dot Foundation (India) and President of Red Dot  Foundation Global (USA). Its platform Safecity, crowdsources personal experiences of  sexual violence and abuse in public spaces. Since Safecity started in Dec 2012, it has  become the largest crowd map on the issue in India and abroad.

ElsaMarie is a 2020 Gratitude Network Fellow, 2019 IWF Fellow and a Reagan Fascell  Fellow, a 2018 Yale World Fellow and an alumni of the Stanford Draper Hills Summer  School, the US State Department’s Fortune Mentoring Program, Oxford Chevening Gurukul  and the Duke of Edinburgh’s Commonwealth Leadership Program. She is also a fellow with  Rotary Peace, Aspen New Voices, Vital Voices and a BMW Foundation Responsible Leader.  She co-founded the Gender Alliance which is a cross-network initiative bringing together  feminists from the BMW Foundation Herbert Quandt’s Responsible Leaders Network, the  Global Diplomacy Lab, the Bosch Alumni Network and Global Leadership Academy  Community (by GIZ).

She is listed as one of BBC Hindi’s 100 Women and has won several awards including  Government of India Niti Aayog’s #WomenTransformingIndia award and The Digital  Woman Award in Social Impact by SheThePeople. In 2017, she was awarded the Global  Leadership Award by Vital Voices in the presence of Secretary Hillary Clinton. She is also  the recipient of Gold Stevie Award for Female Executive of the Year – Government or Non-Profit -10 or Less Employees in 2016.

Her work has been recognised by the United Nations Alliance of Civilisations through the  Intercultural Innovation Award, SDG Action Festival and the UN Foundation at the  Solutions Summit 2016. She is a co-editor and author of “The Demographic Dividend and the Power of Youth”  published by Anthem Press on behalf of the German Federal Foreign Office’s Global  Diplomacy Lab.

She has penned articles that have appeared in CNN, Huffington Post, WIP amongst others.  She has spoken about her work at the Rotary International Assembly 2019, Aspen Ideas Festival , at TEDx MidAtlantic, UN Women, State Department, Vital Voices South to South  Leadership Summit. She has been a panelist for World Bank, NDI, USIP, SheThePeople and hosted a roundtable at the Bloomberg CityLab London 2015.

Prior to Safecity, she was in the aviation industry for 20 years where she worked with Jet  Airways and Kingfisher Airlines. Her last portfolio was Vice President Network Planning &  Charters where she oversaw the planning and implementation of 500 daily flights.

Are We in Good Hands? Is Tax Administration in India Following Good International Practices?

Re-Form: Lessons for Urban Governance Futures from the Pandemic