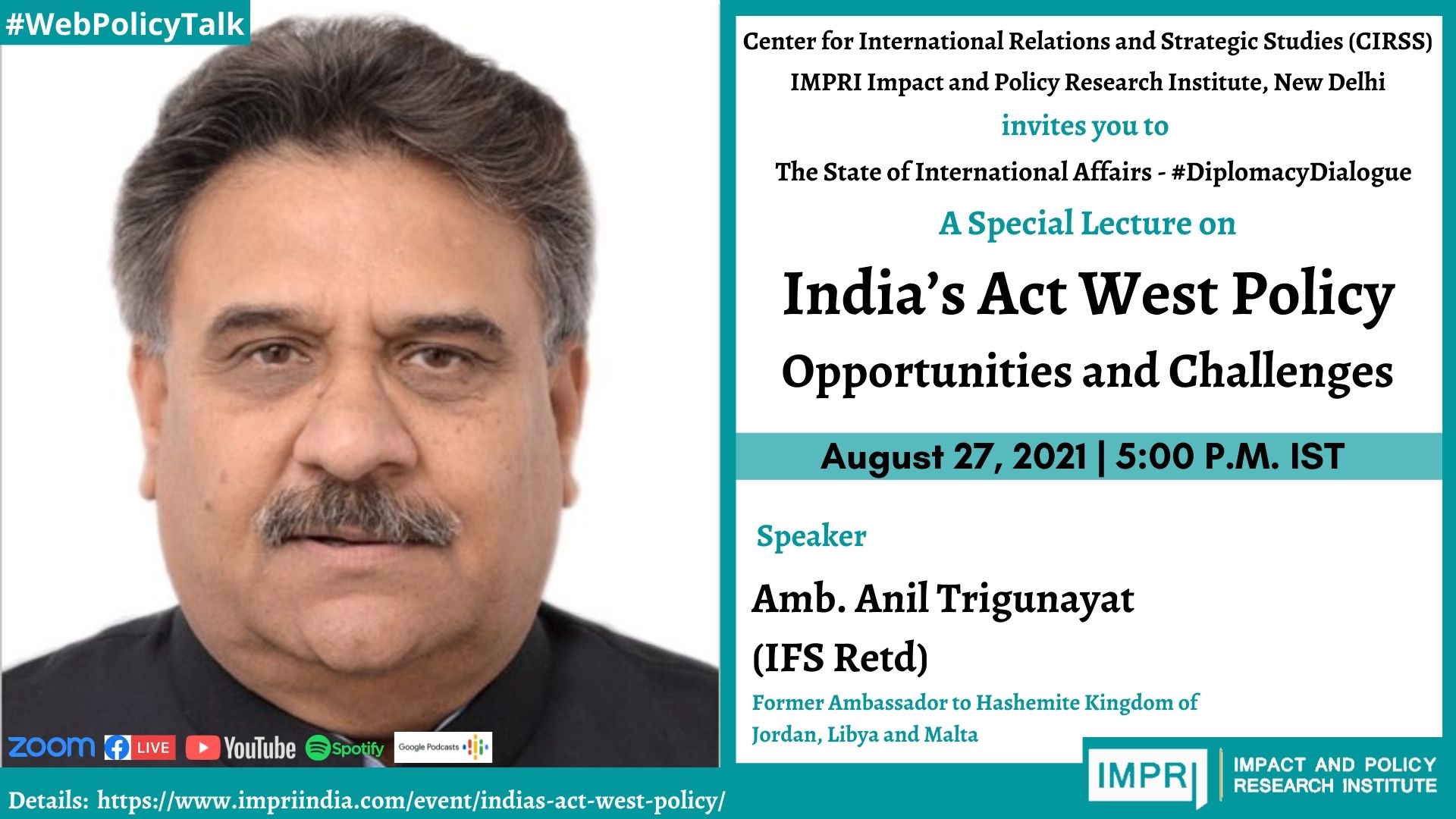 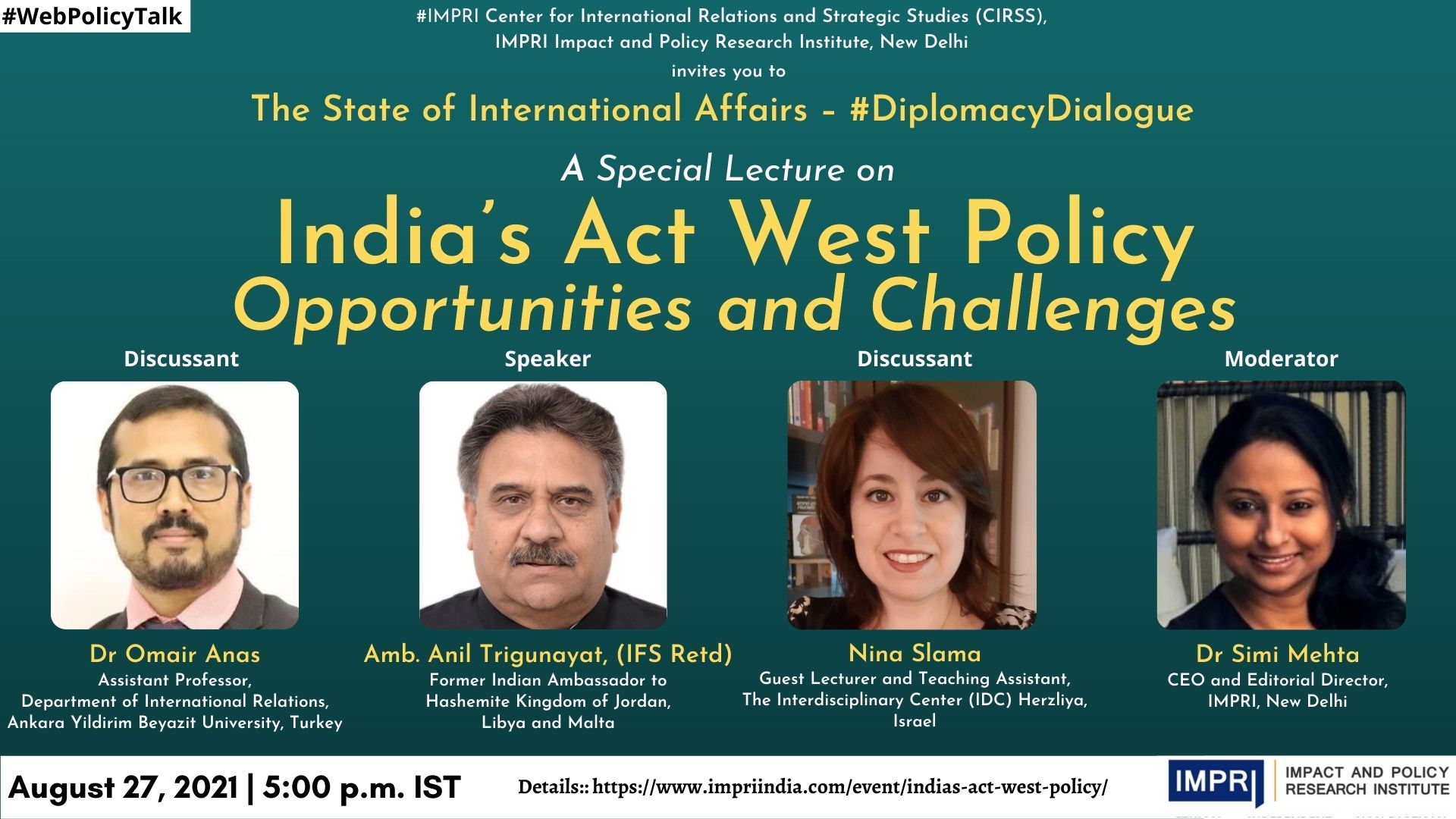 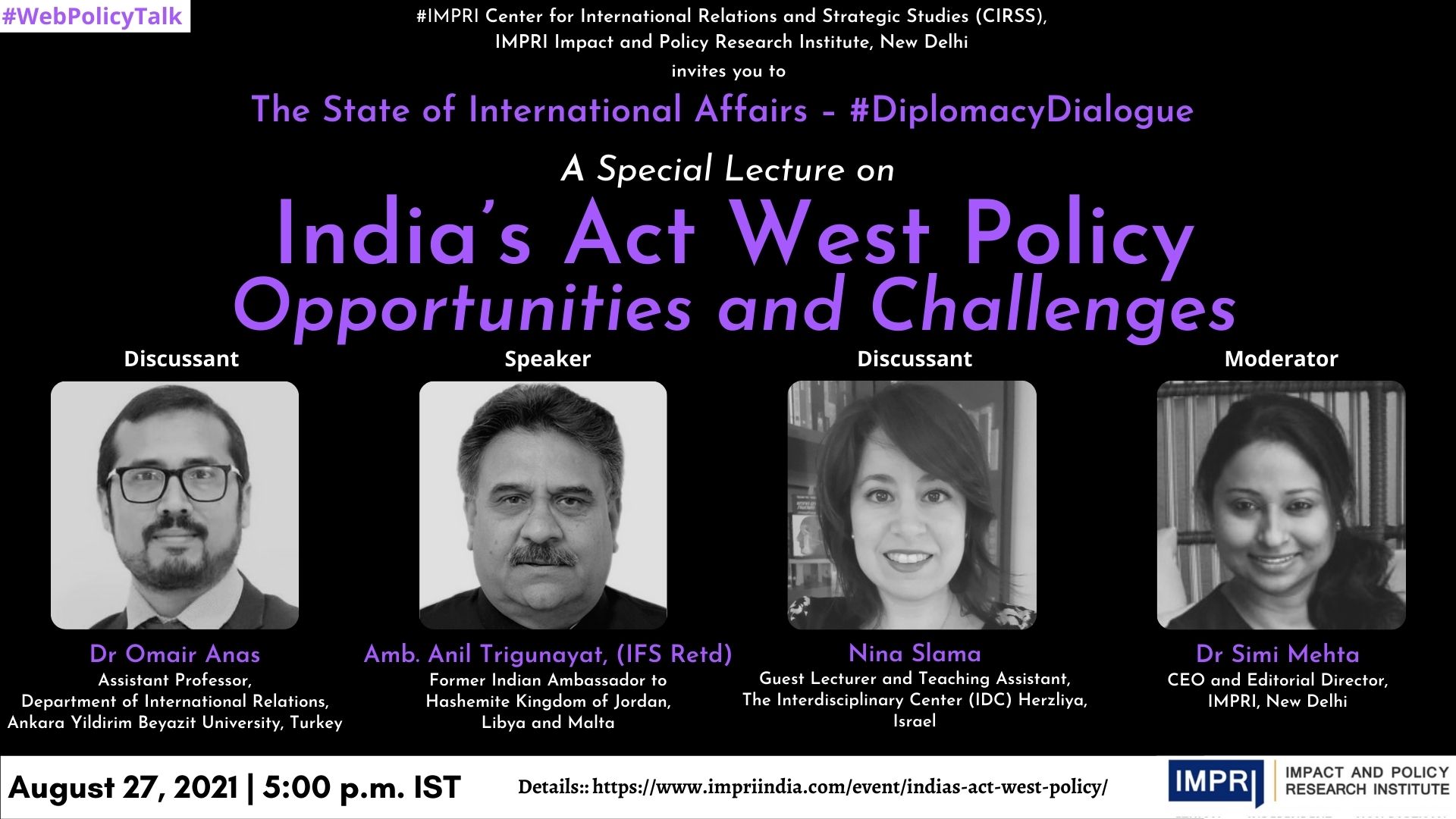 The State of International Affairs – #DiplomacyDialogue

Details of the #WebPolicyTalk:

As a career diplomat, Ambassador Anil Trigunayat has served in the Indian Missions in Cote d’ Ivoire; Bangladesh; Mongolia; USA ;Russia ;Sweden ;and Nigeria . He served in Moscow as Deputy Chief of Mission in the rank of Ambassador. He was also India’s Ambassador to Libya, Jordan, and High Commissioner to Malta. He superannuated in 2016. He is a postgraduate in Physics from the Agra/Kumaon University and studied Russian History, Culture and Language at the Jawaharlal Nehru University, New Delhi. As a visiting fellow he conducted research work on “WTO and Regional Trading Blocs” at the Oxford University. He is a regular contributor and commentator on foreign and economic policy and education and interfaith Dialogue related issues. West Asia, Africa and Russia and Managing India’s interests in conflict zones are his special areas of interest. He is associated with several Think Tanks and Chambers of Commerce. He has published papers in books and periodicals.

Ambassador Trigunayat is a Distinguished Fellow and Head of West Asia Experts Group at the Vivekananda International Foundation (www.vifindia.org ); Member of Governing Council, Raisina House and USANAS Foundation, Indian Forum for Public Diplomacy, Future Billionaire International Network and the India -Japan Foundation; Visiting Fellow & Adviser @The Asian Institute of Diplomacy& International Affairs (www.aidiaasia.org) and @ Nepal Institute for International Cooperation & engagement (www.niice.org.np ) . He is also the Secretary of Association of Indian Diplomats (former Ambassadors Group) www.associationdiplomats.org Presently, Amb Trigunayat is the President of MIICCIA Chamber of Commerce, Industry & Agriculture (www.miiccia.com ). Recently joined the International Advisory Council of the Confederation of Indian Industries (CII). He is also on the Board of Advisers of BRICS Chamber of Commerce and Asia Africa Chamber of Commerce as well as Honorary Member International Trade council, Brussels. Recently he has joined the National Cooperatives Development Corporation as Adviser International (www.ncdc.in ) and as Co-President of www.udmrd.org. He is also member of All India Management Association /DMA, Oxford-Cambridge Society of India; and serves on the Board of Advisers at Peaceful Mind Foundation as well as Confederation of Education Excellence, New Delhi. As a Peace Ambassador, Mr. Trigunayat is closely associated with the Interfaith Dialogue, Peace and Harmony efforts in the Society especially through the Unity Dialogue by (www.unity.earth) and World Congress of Religions, Kazakhstan. Amb Trigunayat knows French, Russian, and Spanish languages.

Omair Anas teaches International Relations at Ankara Yildirim Beyazit University. He did his PhD and MPhil in West Asian Studies from Jawaharlal Nehru University, New Dehi, India. Prior to joining Ankara Yildirim Beyazit University in 2018, he was Research Fellow at the Indian Council of World Affairs in New Delhi during 2015-2018. He was also Visiting Scholar at Freie University Berlin, Germany in 2012-2013. He has published chapters in many edited volumes and journals and for think tanks. He specializes in and teaches Non-Western International Relations, India-Middle East Relations, Religion and Politics, and Arab Media Culture. His commentaries have also appeared on Al Jazeera, Middle East Eye, Indian Express, First Post and Daily Sabah.

Nina Slama is a Guest Lecturer and Teaching Assistant at the Interdisciplinary Center (IDC) Herzliya. She holds a M.A. in International Relations from Bar-Ilan University (BIU). Her thesis focuses on ‘’Foreign Policy Turning Points: India’s Israel Policy 1948-2018’’. She also holds a B.A. in Government, Diplomacy and Strategy, and a Certificate in European Studies from IDC Herzliya. Her areas of interest and research are international relations, India’s politics and foreign policy, India-Israel relations, Israel’s foreign policy, and the European Union. She is fluent in English, French and Hebrew.