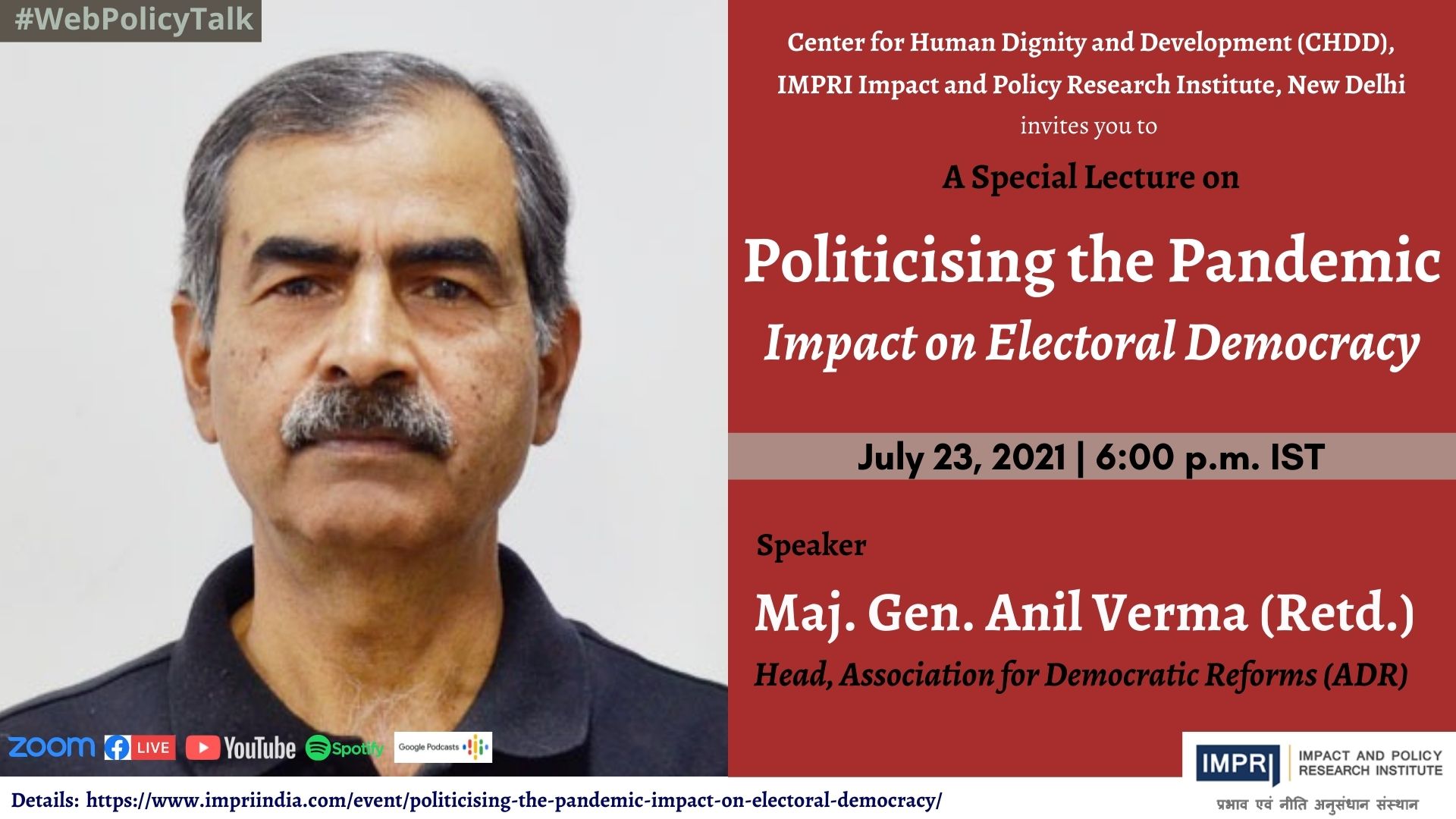 IMPRI Center for Human Dignity and Development (CHDD) invites you to an IMPRI Special Lecture by Maj. Gen. Anil Verma (Retd.) on Politicising the Pandemic: Impact on Electoral Democracy.

Maj. Gen. Anil Verma (Retd.) – B.Com (Hons), M.Sc. (Defence Studies), M.A. Political Science. In 1975, he joined the Indian Army and retired after 37 years of distinguished service. Currently, he is the Head of the Association for Democratic Reforms (ADR) since December 2013, and oversees all administrative and operative activities of the pan-India organisation. He frequently writes for English and Hindi newspapers/magazines on issues related to electoral and political reforms. He has represented ADR in several national and international events pertaining to democracy, electoral and political reforms. From time to time, he is also invited to interact with foreign delegations on issues of governance & advocacy, transparency & accountability in electoral politics, citizen engagement through RTI etc. On 25th January, 2020 (National Voters’ Day), on behalf of ADR, Maj. Gen. Verma received the National CSO Award at the hands of the President of India, Shri Ram Nath Kovind, in presence of Shri Ravi Shankar Prasad, CEC and other Election Commissioners for the voter awareness campaign conducted by ADR.

About the #WebPolicyTalk – Politicising the Pandemic: Impact on Electoral Democracy

The world over, the coronavirus pandemic has resulted in unprecedented challenges which led governments at all levels to work in a context of radical uncertainty. Consequently, holding polls amidst these tough times comes with immense responsibility, requiring unbridled institutional susceptivity and proactiveness. The objective of this lecture is to analyse the role played by various stakeholders during the conduct of elections in the time of Coronavirus and whether it was in keeping with the exigencies of the pandemic. The speaker will look at the role played by the Election Commission of India, major political parties, other institutional stakeholders such as the courts, central government etc. The lecture also focuses on the changes introduced by Election Commission in election campaigning, Model Code of Conduct (MCC), polling and whether or not (prompt and non-partisan) actions were taken against violation of Covid-19 norms. At the heart of this lecture, are the various instances through which the speaker will point out the unfortunate politicization of the pandemic at the costs of risking several lives, subsequently lost to the disease. From playing politics over vaccination to defying Covid 19 protocols at rallies, star campaigners and party leaders made a mockery of a health emergency. While digital campaigning gained precedence, physical campaigning continued unabated until much was lost in the second wave. The speaker will argue that this doesn’t augur well for the integrity of India’s democracy and the interest of its citizenry. The lecture will conclude that, first, the delayed, inadequate and somewhat partisan response from the ECI is a pressing issue and even though the courts took cognizance of the same, it was too little and too late for any course correction and, second, political parties exercised no restraint – they continued to prioritize campaigning over people’s lives even when coronavirus spiralled without remorse.