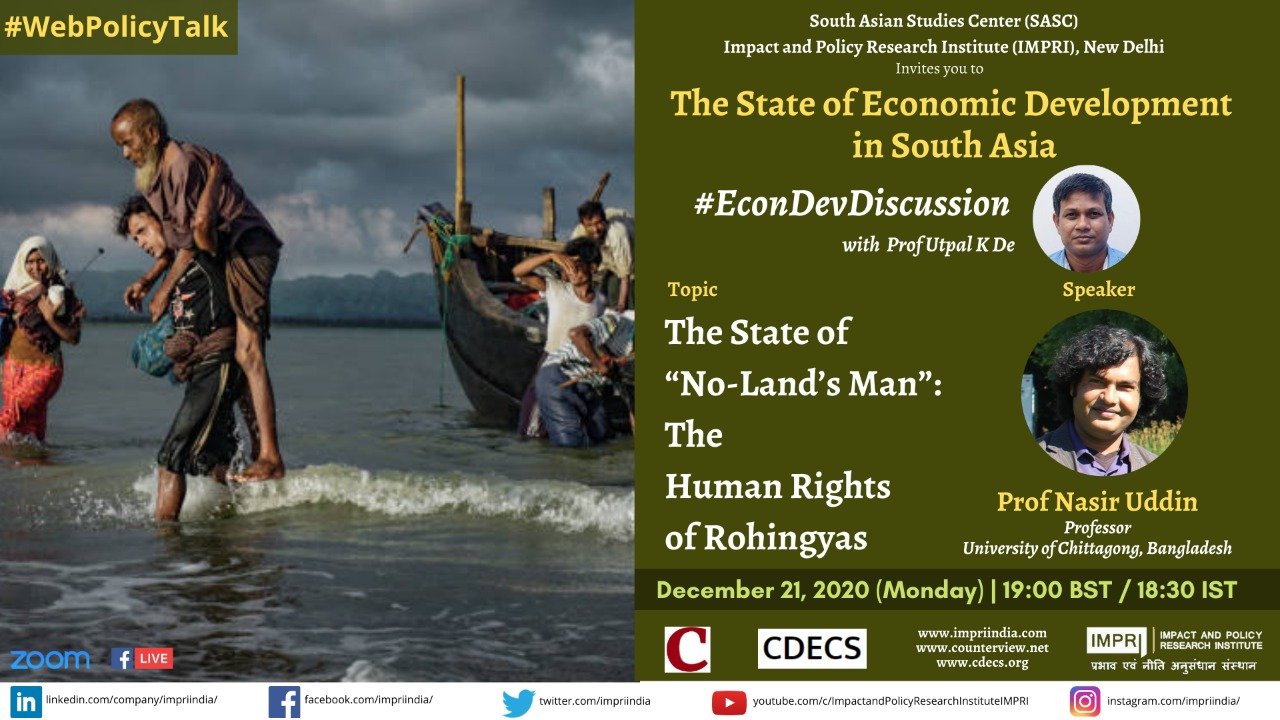 The State of “No-Land’s Man”: The Human Rights of Rohingyas

The State of Economic Development in South Asia – #EconDevDiscussion with Prof Utpal K De on The State of “No-Land’s Man”: The Human Rights of Rohingyas by Prof Nasir Uddin.

His current fields of interests include migration and refugee studies, transborder movement and border-(un)making, indigeneity and identity politics, state in everyday life and the politics of marginality, migration and urbanization, the Rohingya, the Chittagong Hill Tracts and South Asia more general. He has achieved a good number of prestigious awards and fellowships including the MEXT Scholarship, the British Academy Visiting Scholarship, the Alexander von Humboldt Foundation Fellowship, a Visiting Scholarship at LSE and a Visiting Fellowship at Oxford University.

He has published scholarly pieces extensively with globally leading publishing houses including the Cambridge University Press, the Oxford University Press, the University of Pennsylvania Press, Routledge, SAGE, Springer, Palgrave McMillan, Berghahn, Bloomsbury, Orient BlackSwan and so on. His latest edited books include “Life in Peace and Conflict: Indigeneity and the State in the Chittagong Hill Tracts” (Orient BlackSwan, 2017), “Indigeneity on the Move: Varying Manifestation of a Contested Concept” (Berghahn, 2017 [co-edited with Eva Gerharz and Pradeep Chakkarath]) and “Deterritorialised Identity and Transborder Movement in South Asia” (Springer, 2019 [co-edited with NasreenChowdhory]). His latest book is “The Rohingya: An Ethnography of ‘Subhuman’ Life” (The Oxford University Press, 2020).

Registration and Facebook Live Link for The State of “No-Land’s Man”: The Human Rights of Rohingyas

About the Talk
The State of “No-Land’s Man”: The Human Rights of Rohingyas

Every human holds rights as a human being, which is called human rights enshrined in international legal framework and globally endorsed jurisprudence. The UN Declaration of Human Rights (1948) confirms that “everyone is entitled to all the rights and freedoms set forth in this Declaration, without distinction of any kind, such as race, colour, sex, language, religion, political or other opinion, national or social origin, property, birth or other status” (Article 2). Human rights thus are in force globally and locally where global frameworks works in the local settings and the local enactment operates complying with global norms within the state boundary. Human beings therefore enjoy human rights locally and globally under the premise of global justice.

The Rohingyas, an ethno-linguistic and religious minority of Myanmar known as the world’s most persecuted minority, experienced a brutal atrocity in 2017 perpetrated by Myanmar security forces what the United Nations Human Rights Council explained as “a textbook example of ethnic cleansing.” Following an attack made by the Arakan Rohingya Salvation Army (ARSA) on August 25, 2017, Myanmar security forces launched a clearance operation, which, a report of a three-member-panel appointed by the United Nations confirms, forced 725,000 Rohingyas to flee to Bangladesh, about 10,000 Rohingyas were killed in the first two months, hundreds of women and girls were (ganged) raped, and 392 villages were partially or totally destroyed.

Along with the previous ones, Bangladesh now hosts 1.3 million Rohingya in its Southeastern part, Ukhia and Teknaf. The locals are becoming ‘unwelcoming’ since 1.3 million additional people have begun to share local resources, livelihood sources, and social utilities. Now, the Rohingyas are ‘struggling for existence’ in Bangladesh having an obscured past, critical present and an uncertain future. The Rohingyas belong to no state as Myanmar stripped of their citizenship four decades ago and Bangladesh does not recognize them even as refugees as if they are “no-land’s man” (“man” doesn’t mean a male here but people).

Since citizenship is the rights to have rights (Arendt 1973), they claim rights from neither Myanmar nor Bangladesh. Therefore their human rights are at serious risk what they have been living through for decades. The lecture examines the human rights of the Rohingyas beneath the broader spectrum of statelessness, refugeehood, and global justice in the borderland of Myanmar and Bangladesh.

Protecting Diversity, Tolerance and Pluralism amid the Pandemic