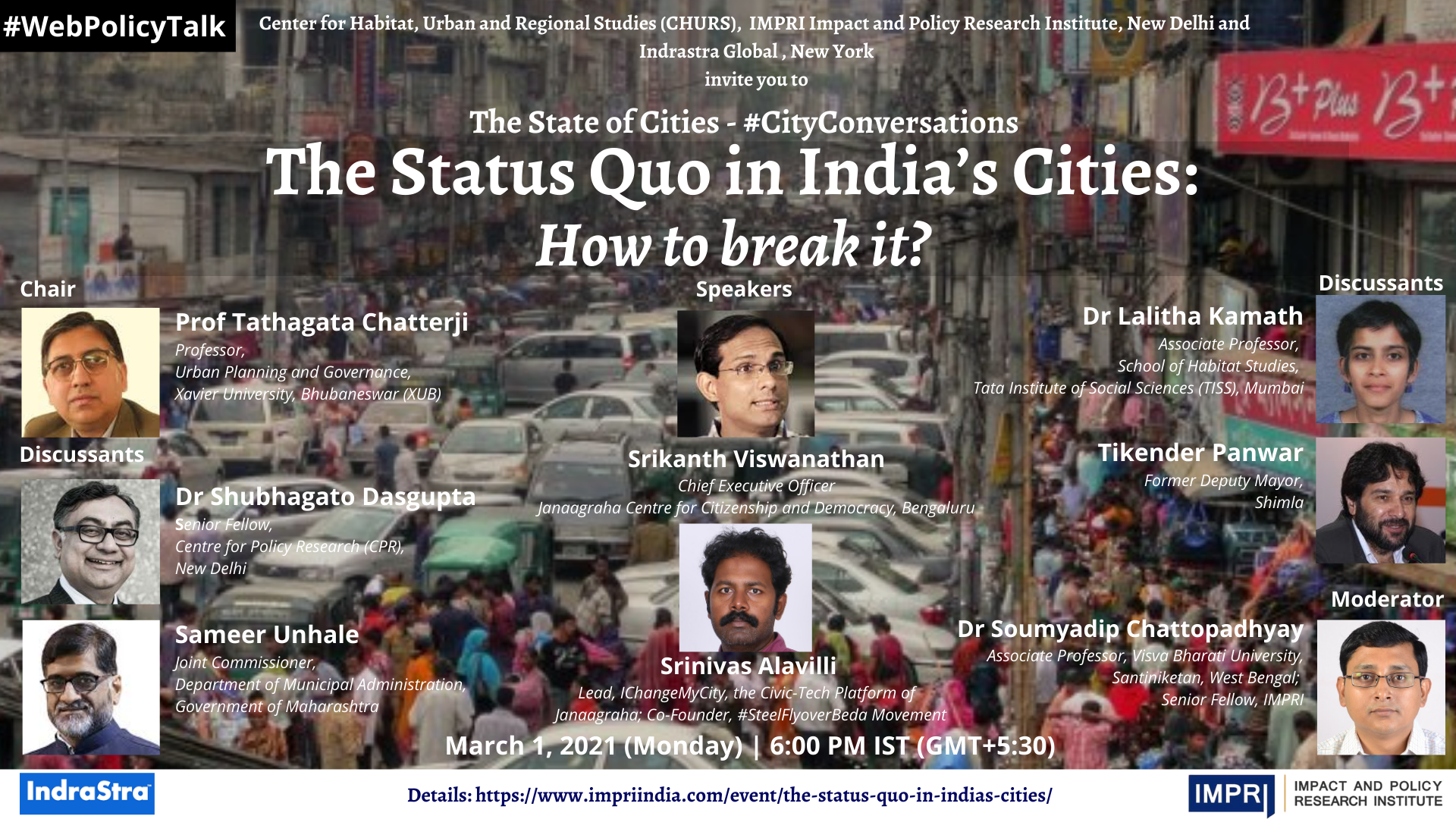 The Status Quo in India’s Cities: How to break it?

The State of Cities- #CityConversations with Srikanth Viswanathan and Srinivas Alavilli on The Status Quo in India’s Cities: How to break it?

The State of Cities – #CityConversations

Srikanth is Chief Executive Officer of Janaagraha Centre for Citizenship and Democracy, a Bengaluru, India based non-profit working towards the mission of transforming quality of life in India’s cities and towns.  Srikanth joined Janaagraha in 2011 in the municipal finance program.

Srikanth is one of India’s leading practitioners of city governance reforms and municipal finance reforms, particularly on the application of systems thinking to reform agendas in cities.  He works closely with the senior leadership in central and state governments and constitutional bodies to shape and implement long-term reforms to municipal finance and city governance in India.  He has been an Associate member of the Institute of Chartered Accountants of India for over seventeen years and prior to joining Janaagraha worked in banking and audit.

Srinivas Alavilli leads the efforts in increasing civic participation in governance. Srinivas drives IChangeMyCity, the civic tech platform of Janaagraha being used in thousands of cities across India and he works on creating grassroots networks between civil society and local governments. Srinivas believes in systemic change that happens when citizens demand it and the political system delivers it.

He comes from software background having worked for 2 decades in Sun Microsystems and Oracle in California, USA and Bengaluru.

Srinivas is one of the founders of the #SteelFlyoverBeda movement in 2016 that led to the formation of Citizens for Bengaluru. CfB is a non political,  public pressure group with no office, no bank account.  CfBs primary goal is to make Bengaluru liveable for all sections of society by mobilising public opinion and voice on the ground for public transport and strengthening institutionalised citizen participation via ward committees.

Are We in Good Hands? Is Tax Administration in India Following Good International Practices?

The State of Real Estate and Housing in India amidst COVID-19 Pandemic: Impact and Way Forward