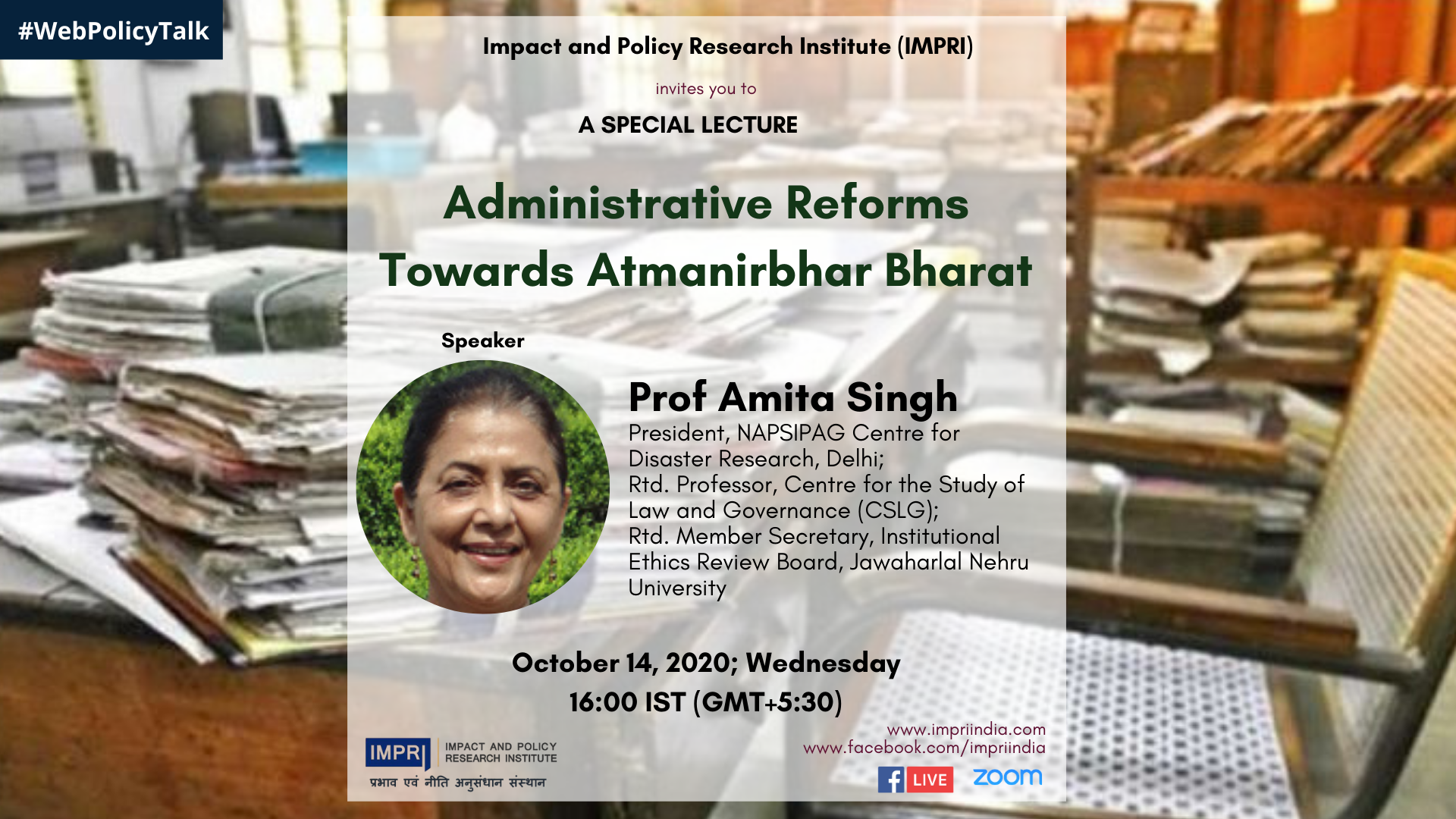 About the Talk – Administrative Reforms towards AtmaNirbhar Bharat

There are two ways to change the deficits of governance one is through reforms and the other through a radical amputation of the past through a revolution. Reforms are always preferable as one gets enough choice to be rapid or incremental, to decide a direction and the quantum, and to involve people to make them sustainable. Reforms are also preferable as they ensure space to accountability and transparency depending upon the source of where the reform comes from.

Administrative reforms in democratic constitutional governance are criticized by experts (Virginia School of Economics, Mancur Olson, Douglas North, Oliver Williamson) as a veiled vote bank politics with no genuine intention to change as the state can never be altruistic, it works for self-interest alone. Critical analysis of most reforms justifies this line as reforms mostly lose the steam once the government goes out of power. If a reform initiative, which has been cleared through the Parliament and is also in national interest then why does the next incumbent not take it forward in a national spirit, why do all governments dump its body like the dumping of the 15 Reports prepared by the Second Administrative Reforms Commission.

Why do governments retitle its caption to match their manifesto and restart the same process all over again? Secondly, the government which created reforms also pushes its cart only to a limited distance where its own existence of vote bank is not imperiled. So in the end, almost every reform initiative has failed to reach its point of optimum returns.

Atmanirbhar Bharat is also no different from other reform initiatives. The title is catchy, contemporary, and matches the government’s repeated aspiration to be entrepreneurial in every way ie; even a pakora shop is better than being jobless. However, ‘atmanirbharta’ or ‘self-dependence’ demands a multidimensional micro and macro reforms which trigger demand flow upwards in a fast contracting Indian economy, which create an enabling environment of transactions, which generate trust in governance processes, and which ensure that the government will definitely hold a falling hand. None of these seem to be on display board as the post-pandemic rebuilding of mandi-markets was not encouraged by most state governments and the maximum demolition of these small market areas occurred during these tough times.

Banking systems are becoming more fragile and the flight of capital is the new fear amongst investors. The 85% unorganized sector which could be the platform for ‘atmanirbharta’ is weakening every day and most NGOs are preferring to windup and close down due to sudden hiccoughs of segmented regulations coming frequently. The MSMEs post-disasters got an INR 20 lakh crore package announcement but regulatory terms were so tough and unclear that most MSMEs on the lower end preferred to wind up their businesses than use the package. State governments with the coming up of the GST Council have found themselves asphyxiated as their local initiatives are getting killed.

Atmanirbhar Bharat has five preludes to it, namely-

China’s Emergence as a Tech Power