According to the Report of UNICEF, India is among the world’s most disaster-prone countries, with 27 of its 29 states and 7  union territories exposed to recurrent natural hazards such as cyclones, earthquakes, landslides, floods and droughts.

Climate change and environmental degradation have further compounded the frequency and intensity of disasters along with increasing the vulnerability of key assets, including people. In addition, almost 1/3 of the country is also affected by civil strife.

To Discuss further, on April 27th, 2022 special lecture on the topic, disaster risk reduction in India: recent lessons and strategies for the future was conducted by IMPRI Center for Environment, Climate Change and Sustainable Development (CECCSD) and IMPRI Impact and Policy Research Institute, New Delhi.

The deliberation was the  part of The State of the Environment – #PlanetTalks with the guest speaker, Prof Anil K. Gupta who is Head of Division, International Cooperation, Advisory Services, e-learning & Media Portfolio; Director of Projects & CoE; Full Professor of Policy Planning & Strategies, National Institute of Disaster Management (NIDM), New Delhi

A topic of immense significance was explained by professor Anil Gupta and was dealt with further by Mr VR Raman and Mr Himanshu Shekhar who worked so closely on the topic.

Hence, the questions that were raised  in the session were :

Prof. Anil K Gupta in his talk put forward various insights on the status of disaster risk reduction in India and how we start thinking about future issues.

He quoted that as We are celebrating this year as Aazadi ka Amrit Mahotsav and across all the sectors we are looking at what has been our journey of the past,  where are we in the present and how do we look at the future roadmap. It becomes equally important to start looking at the challenges because until we identify and evaluate the risk, the journey remains more uncertain.

Sir Also Discussed that a systematic approach to disaster management started in 1991-2000 when the united nations declared a decade of natural disaster reduction.

the initial thought in disaster reduction was the title of the magazine that was being published by the international strategy for disaster risk reduction that is now called UNDRR ( United Nations Office for Disaster Risk Reduction)  earlier it was called ISDR. 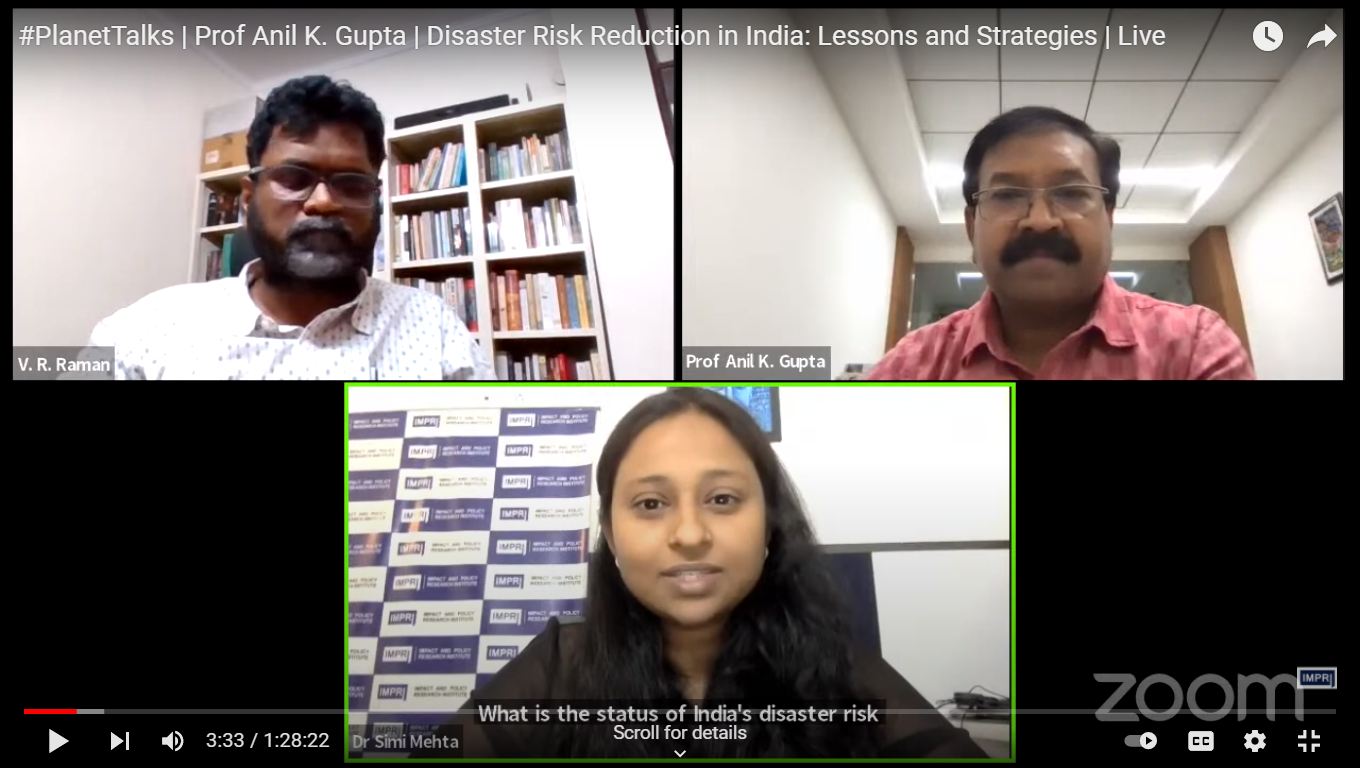 Sir Also gave the idea of the mid term phase and the end phase of the Decade were not only the engineering-centric approaches but a lot of humanitarian and social dimensions come into play and it was also realized that most of the natural disasters are also associated with the environmental challenges.  so it was also the period that on the lateral front the awakening about environmental conservation was also ongoing and people had started discussing global warming.

The journey of DRR was seen in session as  :

The discussion was preceded with the priorities post covid 19 situation and the sendai framework that resulted in Technological transformation. Another aspect came into consideration was climate change with respect to the  2007 ,  fourth assessment report and the sixth assessment report  . It stated that water related disasters like floods, drought, cyclones, heatwave, cold wave, extreme events, and cloud thunders are increasing in their frequency and intensity is rising which should be reduced via disaster risk management.

Multi-hazard geographical conditions of India and the vision of 2050 where India will become the global leader and advisor in Disaster control across the countries were discussed. Mention of the biggest industrial tragedy of Bhopal, the Orissa cyclone when more than 10,000 casualties occurred due to lack of proactive planning, a remembrance of the Bhuj earthquake due to lack of preparation for Tsunami in Uttarakhand due to developmental challenges and how the Indian government and Indian Technological advancement dealt with it was further mentioned by Prof. Anil Kumar showcasing the activeness and policy implementation of the government dealing with the issue of Disaster Management.

Emphasizing, particularly on this aspect, Mr V R Raman also Discussed risk reduction and resilience, what are the key institutional and structural issues that the country is facing and suggested various solutions for that as well.  Stating the issue of the Bhopal, Visakhapatnam and Orissa disasters he constructed his talk with various insights and useful measures that our country is looking for either socially or financially on disaster management and support to affected ones. Also, he discussed various practices that need to be implemented in order to forge vigorously toward the attainment of sustainable development goals.

Sir also mentioned that Awareness, education, preparedness,  prediction and warning systems could reduce the disruptive impacts of a natural disaster on communities. Mitigation measures such as the adoption of zoning, land-use practices, and building codes are needed, however, to prevent or reduce actual damage from hazards.

To conclude the session, finally, the vote of thanks on behalf of Embry center for environment climate change and sustainable development was given by Karnika who is a researcher at IMPRI, Impact and Policy Research Institute for diverse perspectives and valuable insights into the deliberation on Disaster Management. Further, she and the other panellists expressed their hope for more such talks by IMPRI in the future.

Zubiya Moin is a Research intern at IMPRI. She is currently pursuing Bachelors in Economics (Hons.) at Jamia Millia Islamia, Delhi.

Paradoxes and Challenges in Approaching Gender Equality in India Today