On behalf of the Center for Habitat, Urban and Regional Studies (CHURS), IMPRI Impact and Policy Research Institue, New Delhi and Indrastra Global organized a session under the series The State of Cities – #CityConversations with Dr Soumyadip Chattopadhyay, Associate Professor, Visva-Bharati, Santiniketan and Senior Fellow, IMPRI. The cogitation, titled State of Finances of Cities in India, was done on October 15th, 2020  was part of the #WebPolicyTalk with Dr Ravikant Joshi, Advisor, Urban Management Centre, Ahmedabad and Former Chief Accounts Officer, Vadodara Municipal Corporation.

Dr Soumyadip Chattopadhyay started the talk by stating that as the world is urbanizing and so is India and our cities also are plagued with challenges around infrastructure development and service delivery which we likely know that it is important for countries to urbanise rapidly. Given the colonization example of London and its progress,  India has also shown how a country can become a world health leader but the city or local government bodies are still suffering from a lack of policy implementation and lack of financial resources to fulfil the function of the decentralization process with regards to the 74 constitutional amendments act. 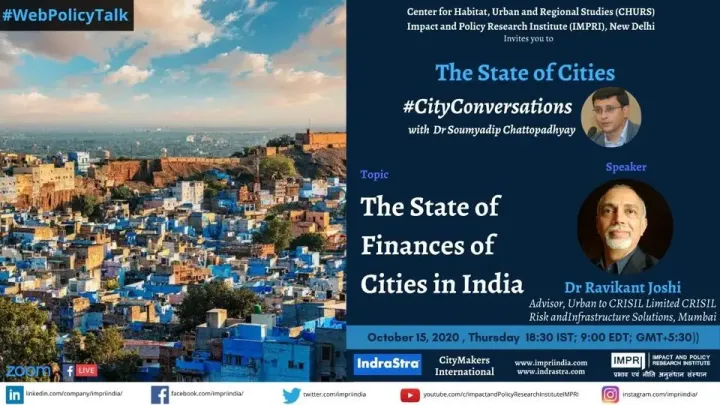 Even cities are able to generate the resources through public & private tax and property taxes but still struggle with how to use it sustainably and rely on internal government functioning for financial resources. In recent times public-private partnerships and private financing have increased but proper and adequate management is still lacking to generate the new projects and policies. So the question here arises is, what can the city do in the short and long run to improve its financial health to extract the increase in sustainable projects?

To amplify this topic Dr Ravikant Joshi was invited to continue the talk series. He Initially mentioned the perennial issues, Recent status, Miniscule and Stagnant share of Municipal Finance in GDP, Stagnant Investment in urban infrastructure and continued Shrinking Space of Cities Finances, Skewed state of Cities finance across the State,  Inability of Cities to absorb funds  &  Role of PPP and it’s negligence.

In India, local bodies have very few financial resources and if available, they are inadequate. After GST was introduced, financial conditions have become more skewed and worse. Inadequate local resources in the hands of Municipal Bodies property tax & user charges also make it more subservient with respect to the development of the cities.

Sir mentioned that Inadequate functional and fiscal devolution, fiscal transfers, grants-in-aid, failure of SFC to revamp municipal finances, Institutional Defragme, poor administration in all respect of tax and other powers also refrain it in monetary terms. Non-augmentation of non-tax resources, Inadequate borrowing powers and options, Inefficient management of municipal resources, cost inefficiency, Rudimentary and weak financial administration, budget making and Lack of professional capability are some points which were discussed in the series and conclusions were provided to develop it tenably.

Recent Status of Cities of India

Dr Joshi picked up the threads on the recent status of the situation of the cities in India according to the survey and data collected from the financial commission of India. Miniscule and stagnant share of Municipal Finance is around 1 % of GDP for the past 18 years which is relatively very less and also absolute with Investment in urban infrastructure (including metro and housing) as stagnant while investment in core basic urban services stagnant at around 0.4 of GDP during 2011-18, which is showing the increasing trend but with negative slope.

Miniscule and Stagnant Share of Municipal Finance in GDP

Some Facts and Figures were discussed and interpretations on the basis of them were given by Dr Joshi such as :

The share of States (of GoI and states taken together) is up from 58% to 65 % during this period. States’ spending is driven by :

(ii) higher outlay towards special projects including metro-rail projects and

Municipal own source revenue to Total Municipal Revenue including transfers from Center and State which had increased slightly from 61 to 63.5 per cent during 1997-2001, declined to 51.6 per cent during 2002-12 and to 43 per cent during 2012-18) as Central and State started devolving more and more funds. In other words funding for Cities through national and state sources increased to 45% from 31% from 2002-to 2018. Aggregate municipal income (Revenue + Capital) including transfers grew from Rs. 73,000 crore to Rs. 1.71 lakh crore from FY 11 to FY 18. While this translated to a CAGR of 13 %, consolidated receipts of ULBs remained largely flat at around 1% of GDP during this period.

Central and State transfers grew faster at 14% and 21% during this period but Own Source Revenue (OSR) grew slower at 10% CAGR leading to its share in total receipts declining from 51% to 45%. Cities left with only one tax source depend on Tax revenues as the major source of OSR. 60% of OSR comes from taxes(Property tax constitutes nearly half of this). A few states have shown improvement in other taxes (water tax, sewerage tax, professional taxes) and Non-tax revenues (including user charges/ town planning fees).

Within OSR, Property taxes formed the major revenue head with a 35% share but grew slower than Central and State transfers at 13% CAGR during FY 11-18. In GDP terms, property tax revenue hovered at 0.14-0.15% of GDP. This is far below the level of 1 per cent estimated for recurrent taxes on immovable property in OECD countries (OECD Revenue Statistics 2011).

Skewed State of Cities Finance Across the States of India

ULBs and their Status of Not Augmenting their Own Sources

According to the Economic Survey of India 2017-18,  Property Tax Potential was Unexploited, Evidence from satellite data indicates that Bengaluru and Jaipur collect only between 5% to 20% of their potential property taxes. A study conducted (2012-13 data) by the 14th CFC indicated that per capita revenue from property taxes was highest at Rs.1677 with a low of just Rs. 42  Study of Property Tax in 36 million-plus cities (2007-08 data) for 13th CFC  Rs. 486 per capita average; Mumbai Rs. 1334, Patana Rs. 25 per capita  Properties paying tax to total properties – 56%; collection efficiency – 37% of demand; Cities collected only 21 % of their potential property tax. Property tax revenue – 0.16 to 0.24 % of GDP is much lower compared to developing countries’ average of 0.6 % of GDP and developed countries’ average of 2 % of GDP  ULBs by and large have not been able to levy adequate user charges to cover even the operation and maintenance costs. Cost recovery ranges on average from 2018.

Information on debt accessed by ULBs is unavailable in the public domain, The 15th FC 2019 report pegs borrowings of ULBs nationally at Rs. 27,427 crore or just 2.8% of all municipal receipts from FY 11 to FY 18. Of this, Rs.14,171 crore (or 52% of this) is reported to have been accessed by ULBs in Gujarat alone. A study for the 14FC pegged total debt in FY 13 at Rs. 920 crore or 1.4% of all ULB receipts. Irrespective of how we look at it, borrowings by ULBs have been negligible relative to revenue receipts or investments.

Out of 466 cities, all 163 cities (35 per cent) have received investment-grade ratings (BBB— and above). But Only 35 cities belonging to 12 States out of 163 cities have received high or adequate investment (A- and above) comprise a 9 crores urban population  Out of these 35 cities only 21 cities belonged to the Smart Cities Mission. The role of PPP is still negligible 174 awarded projects involving an outlay of Rs. 41,258 crore awarded during the last 15 years – more than 100 of these were awarded during 2007-13, with project awards peaking in 2010.

initiatives (often champion-led) without backing these with

(i)  programmatic scale-up efforts and hence remain consigned to piloting and proof-of-concept efforts nearly every time.

(iii)  Given the lack of visible opportunities and adverse risk profile, the developer-bidder ecosystem is weak as there is little incentive to invest in creating requisite capacity in the first place.

Acknowledgement: Tanmay Jain is a research intern at IMPRI.