The State of Employment and Livelihoods – #EmploymentDebate

The State of Employment and Livelihoods – #EmploymentDebate

The COVID-19 pandemic has destroyed the livelihood and employment of millions of people across the world.  As per an International Labour Organization (ILO) report, nearly 400 million full-time jobs were lost in the current year’s second quarter (April-June 2020) due to COVID-19. This has aggravated the unemployment situation especially in developing regions such as South Asia, where 110 million of the total 235 million full-time jobs were lost in the same period of time. It is estimated that job losses increased by over 400 per cent in South Asia and Africa each since the first quarter of 2020.

There are various reports and surveys estimating huge job losses in the informal sector and the temporary nature of work in services and industrial sectors, particularly in South Asian countries. However, these reports also highlighted some silver linings of the present crisis in the form of an increase in agriculture and gig economy jobs, which are least affected and have future job potential. The job losses during lockdown were huge in the informal sector or among those engaged in casual labour and temporary work. However, survey findings also highlighted that once the lockdown would be over most of them would get back to their casual and informal work.

This is also true in the case of India, where, as per a Centre for Monitoring Indian Economy (CMIE) report, around 6.8 million daily wage earners lost their jobs during April 2020, and around 14.9 million people took to farming during this period. But about 18.9 million salaried people who have lost their jobs during the same period may not get back to employment in the near future as salaried jobs are more difficult to retrieve.

These ballooning numbers of job losses, particularly of full-time salaried jobs, are extremely worrying for policymakers and other stakeholders in India and other South Asian countries today. With this background, the #IMPRI Center for Work and Welfare (CWW), along with Counterview, and Working People’s Charter, is carrying out a discussion series called The State of Employment – #EmploymentDebate to engage with experts on employment issues.

The experts share their insights on the challenges and way forward in achieving quality employment for each segment of society. The series explores the role of governance, corporations, civil society, the populace, and other actors in realizing an equitable society.

The #WebPolicyTalks are conducted via Zoom webinars and streamed live on Facebook. The event video is available on the IMPRI YouTube Channel, thereafter. A recording of the session is also available on the #WebPolicyTalk: Live at IMPRI podcast, on Spotify and Google Podcasts. An event report is published based on the deliberations and wider dissemination takes place through media coverage.

The audience is composed mostly of policymakers, practitioners, researchers, faculty, and University and college students across India and other countries.

The outcome of the deliberations is disseminated through various social media platforms and media outlets and is aimed at contributing to the future courses of action for policymakers, practitioners, researchers, and civil society organizations.

Below is the list of #EmploymentDebate events, along with links to the relevant details: 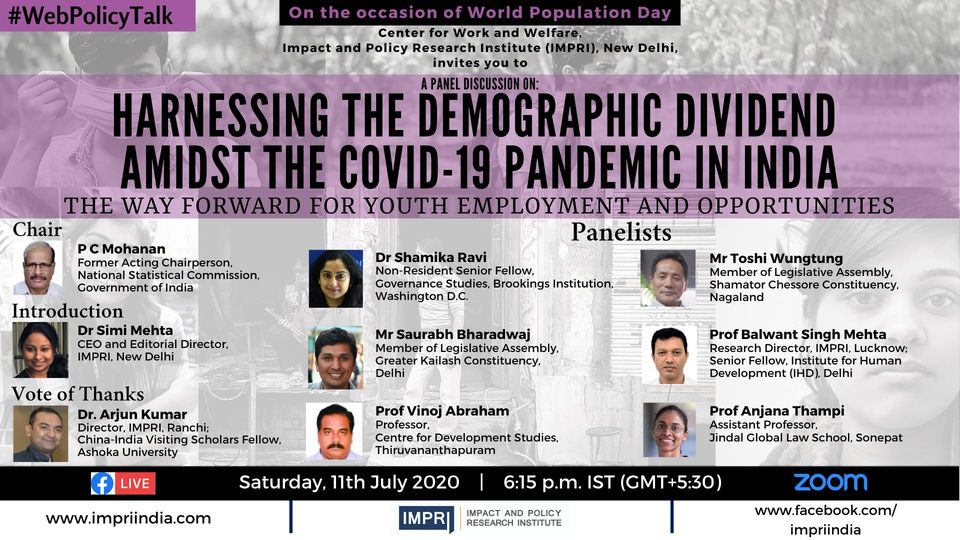 Also see our other discussion series: